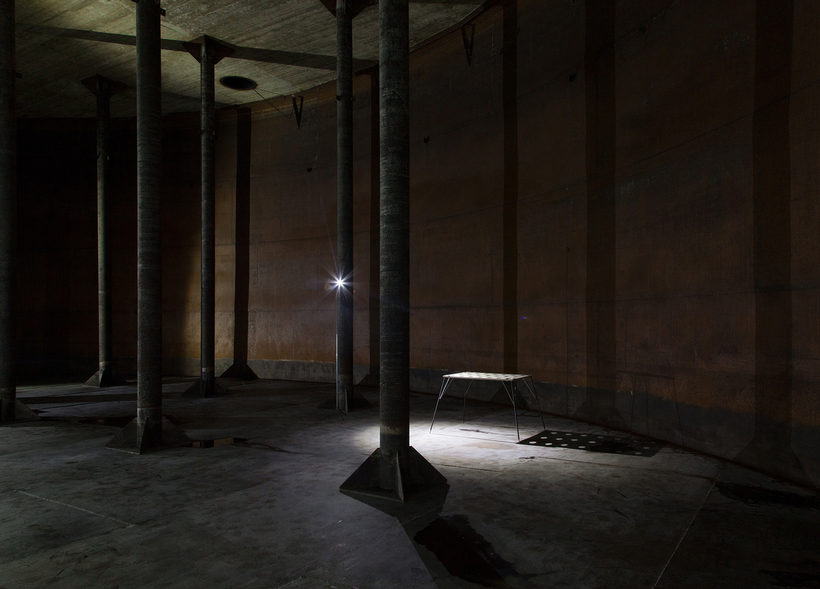 "And I still find myself wondering if there is not always some deep similarity between the way war organizes space and movement and the way the contemporary society organizes them; that is, if the military landscape and military society are not both in essence intensified versions of the peacetime landscape, intensified and vitalized by one overriding purpose which, of necessity, brings about a closer relationship between man and environment and between man."
J.B. Jackson

NEPS - North European Pipeline System is a 650 kilometer long pipeline system that runs from Frederikshavn in the north of Jutland to the south of Denmark and into Germany. The construction of NEPS began in 1955, as part of NATO’s fuel distribution strategi.

The exhibition (W)Under Works at the Coastal Museum of North Jutland, Bangsbo, provides an alternative view of the military landscapes of the Cold War period. They are anonymous and closed areas, located close to our everyday landscapes, but hidden from the gaze and consciousness of the surrounding community. As covert and distinctive cultural environments, since their establishment, they have had their own strategic and structural logic, which not only constitutes a characteristic feature of the Danish defence, but which also marks society’s perception of the landscape as a military resource.

(W)Under Works takes its point of departure in NEPS (North European Pipeline System), which is one of the most extensive structures of the Cold War, but also one of the least conspicuous. NEPS is an extensive network of tank installations and oil pipelines running from Frederikshavn in northern Denmark all the way to Germany.

From the air, Northern Jutland resembles a large patchwork quilt of well-defined geometric shapes consisting of fields, farms, woodlands, windbreaks, towns, villages and roads that cut through and connect every corner. It is a uniform landscape where only the chaotic contours of the coastal areas have escaped human control and adaptation. But dispersed across the Danish territory, scattered enclaves of the NEPS facilities are located alongside residential neighbourhoods, the farmer’s fields and industrial areas, and which only reveal their existence in the form of discrete fences and characteristic black and yellow signs. The scenic location of the tank areas is humble in order to avoid attracting attention from the former enemy in the East, they are surrounded by tall fences, and above ground, only simple buildings and facilities are seen, with a functional and toned down expression, stripped of architectural processing. The large tanks are not visible, as they are dug into the already undulating Jutland landscape, and with time, trees and shrubs have grown, so the hills today appear as a natural part of the landscape.

Once you have gained access to the area and move around in the hilly terrain, the only signs that there might be something going on underground are entrances with thick metal doors, small pipes sticking out of the ground and manhole covers. If you want to experience the interior of a tank, you must first open a heavy iron door at the foot of one of the hills, and then move through a long and narrow concrete corridor to get to a technical room. Here, a round metal hatch is found, indicating an entry to the tank. Once you get your body squeezed through the small opening, a pitch-black and claustrophobic room appears. But when you turn on your flashlight, the room becomes a gigantic and almost magical place with its architecture and acoustics reminiscent of a cathedral. Sounds echo for 25 seconds, and even a deep breath resonates. The room has a diameter of about 30 meters and is 8 meters high, with a ceiling carried by a number of columns, and walls covered with large rusty metal plates. Several of the tanks, which originally contained oil, are no longer used, and are now left to natural processes. What is left are remnants of oil, beautiful rust formations and tracks of lizards and insects that have formed organic patterns and shapes that stand in stark contrast to the solid construction and geometric space of the tanks.