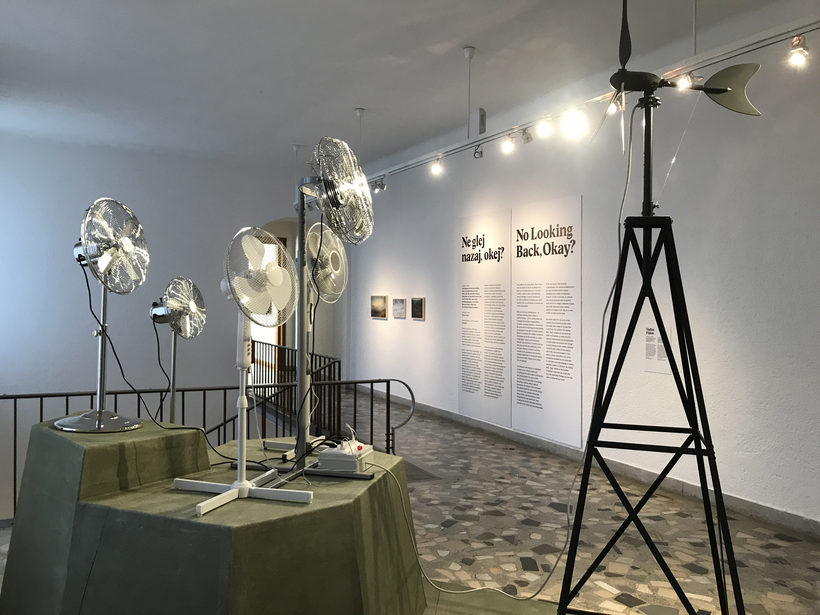 The exhibition No Looking Back, Okay? stems from the belief that we do not perceive the past as a concluded story, be it in the form of either a colourful history, lived memories, cultural heritage, or political symbols, but as a field of possible new experiences, which requires from us a contribution of creative and critical responsibility.

Memory in its many manifestations − as individual, historical, social, cultural, or political memory − and our confrontation with it through the processes of appropriation, recreation, animation, distortion − has become the central tool for exploring and understanding our perception of the past and current realities. Memory is a powerful and complex mechanism that shapes our identity and gives us a sense of belonging. It stands at the intersection between facts and fiction; it interferes with our daily lives and blurs the coordinates of time and space. Memory is always in transition, known for its uncertainty and inclination towards forgetfulness. Or, as we have already learned from Freud, memory is but another form of forgetting.

The obsession with memory is a significant symptom of our cultural present and is conditioned by modern ways of reproduction and communication. The way in which we think about the past today is increasingly becoming a memory without national boundaries. The horizon of time and space has spread over the local and the national. At the same time, abundant discourses about memory and remembrance, which characterize the new millennium, seem to replace the activist enthusiasm about the promises of the future that were characteristic of the last century. Past fantasies of globalisation and continuous development are now considered archive material belonging to the cabinet of disillusions. However, in order to articulate our political and cultural discontent with the present world, we want to imagine alternative futures even today. Discourses about memory enable us to imagine them. We are in need of both, the past and the future.

We wonder about the role of art in this complex and paradoxical process, which seemingly rather relates to the past than to the future. The exhibition No Looking Back, Okay? presents the very practices within contemporary art production that approach remembrance and deconstruction of history boldly; the practices that through uncompromising actions confront individual memories with conflicts of historisation; and, finally, the practices which in their desire to break conventions carry within themselves disobedience and rebellion next to a formally convincing language of humour, absurdity, poetics, or reduction. No Looking Back, Okay? reflects on the question of whether a look back can at last offer us a new beginning? Perhaps the time has come to remember the future!